Unlike the beta releases during the past two years, this version of ImageJ2 integrates fully with the legacy ImageJ 1.x user interface. Consequently, this version of ImageJ2 really is the same ImageJ you know and love, achieving 100% backwards compatibility with existing ImageJ 1.x plugins, scripts and macros, while still providing access to the redesigned capabilities of ImageJ2. This allows you to keep using ImageJ in familiar ways, while also enabling migration toward more powerful new features as needed.

The Fiji distribution of ImageJ has bundled ImageJ2 for quite some time, so you may already be familiar with some of ImageJ2’s features, some of which—such as the Updater and Launcher—were originally developed as part of Fiji, now they are part of ImageJ proper. But this release candidate represents the first time Fiji has really been built fully on top of ImageJ2.

ImageJ2 provides a wealth of new features and capabilities: 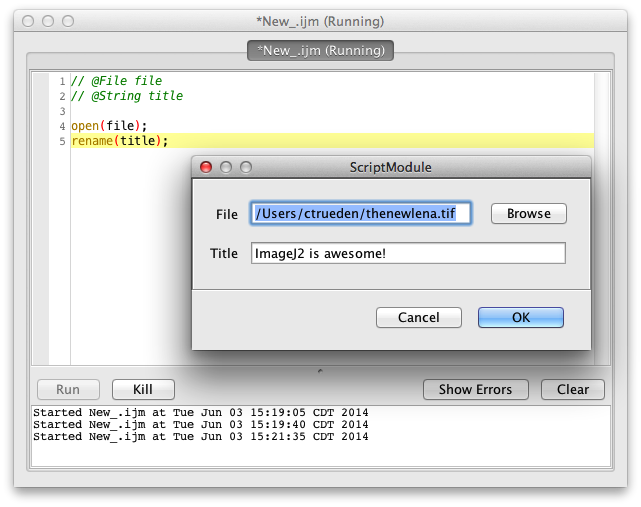 ImageJ2 comes with a versatile and elegant scripting framework: all languages can be accessed in the same, consistent way. New languages can be supported by implementing script language plugins; the script editor will automatically support such languages. By default, ImageJ supports Beanshell, Javascript, Jython, JRuby, Clojure, ImageJ 1.x macro and Java “as a script language”. Experimental alpha versions are available for Scala and native Python.

Similar to commands supporting @Parameter annotations asking ImageJ to auto-generate dialogs, scripts support a related concept: By declaring typed variables in commented lines on top of the script, ImageJ (or KNIME, CellProfiler, OMERO, etc) will be asked to auto-generate the appropriate dialogs when executing the scripts.

Identical to thusly parameterized scripts, it is now also possible to declare in ImageJ 1.x macros what input parameters are required (see the ImageJ2 script editor screenshot on the right with a parameterized macro in action).

More than just an application

ImageJ2 breaks the “one developer, one machine, one task” paradigm: it is also a modular collection of highly reusable software libraries built on SciJava, using a powerful plugin framework to facilitate rapid development and painless user customization.

How to test the release candidate?

You can either download the .zip file or just update your Fiji installation: ImageJ 2.0.0-rc-2 is already part of Fiji.

Please send all bug reports to the ImageJ mailing list. And thank you very much for trying ImageJ2!