How can we properly define colocalization? One could suggest:

Degree of overlap between two colour channels in one image, which can be characterised by

Estimating colocalisation by looking for yellow colour in images where the green and red images have been colour merged is a bad idea because: 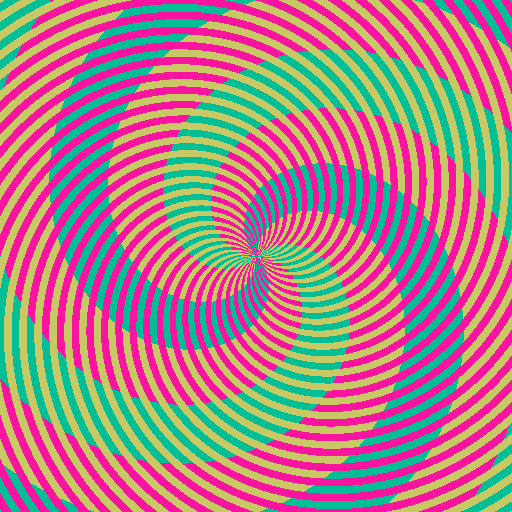 What we need are objective quantitative methods to estimate/measure colocalisation in 2 colour channel images. These will output colocalisation coefficients that should be:

But… in order to do quantitative analysis on images, they muse be acquired in the correct way, such that they contain the information that you are tring to measure! You must also understand the limitations of your microscope and the digital imaging process.

There are various problems that need to be understood and overcome while collecting images at the microscope. No clever analysis can save crappy images (aka. The “crap in - crap out” principle). If you lose or don’t collect information that the microscope could have seen during imaging, it is lost forever. We list here a few of these dangers. Being modest, we should make it clear that some of the difficulties are actually unavoidable and must be lived with, but understood all the same.

Definition: The small features/edges of the real object are not well represented in the image.

This phenomenon will artificially enlarge the size of your objects, making them look bigger. The problem with this is that two non colocalizing objects might appear to colocalize in the image because of the blur. This gives false-positive results.

Possible origins of blur are:

Some things we can’t do anything about (hey, that’s the light microscopy facility, hum?):

If the blurring of you images is too much, you might want to consider deconvolution. Have a look at this page from SVI, the guys that provides Huygens software to see how it can help.

The presence of a high background will generate a huge amount of artificial, irrelevant colocalization. You are not interested in unspecific colocalization - your reviewers might only be mildly happy if you spend a lot of time analysing background. You do not want background to affect your analysis results.

Hopefully our colocalisation analysis methods will be insensitive to small differences in background, but thats no reason not to get it as low as is possible. Having bright real signal and low background improves the “dynamic range” of the information, and thats a very good thing for quantitative analysis.
At the microscope, you must decide what parts of your image are background and not interesting. Then you can set the microscope to give the background very low or zero intensity values in the images.

Getting rid of high background? Consider:

Colocalisation in a pixel might be false, coming from noise, and thus, not be real. For correlation based statistical approaches to colocalisation analysis, increasing noise lowers the apparent colocalisation. Hence, for noisy images, an attempt must be made to suppress or remove the noise in order to get closer to the true noise free correlation. Constrained iterative deconvolution can act as a smart noise filter that increases contrast and suppresses noise, so widefield and confocal image data should be deconvolved before colocalisation analysis.

One must have a signal strong enough to allow a good enough signal:noise ratio, or be able to deal with a weak signal and separate it from the noise, using eg iterative deconvolution!

Cross talk and Bleed through

Definition 2: You detect emission from the wrong dye, and falsely believe it comes from the right dye.

So… this one is the very worst and most dangerous problem in colocalization experiments. It can be explained with the following spectra: 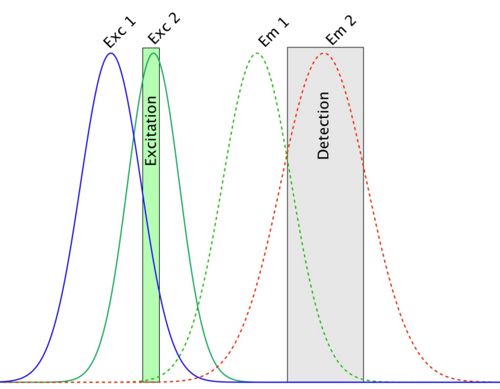 In this picture, the detection setup is configured so as to measure emitted light from the second fluorophore. The problem is that in this detection channel, some of the light emitted by the first fluorophore is also collected and integrated to the channel 2 signal. This is called bleed-through. When you are going to compute colocalization of this channel with the first one, there will be a part of the signal that will colocalize with it whatever it is, since signal coming from the first fluorophore is present in both channels. That is, you generated false-positive result.

You could avoid this by selectively only exciting fluorophore number one, and acquire the first image, then excite the fluorophore number 2 and acquire the second image (sequential imaging). But on these spectra, you can see that the excitation curves also overlap, and that the excitation wavelength hits both dyes efficiently. The two fluorophores will both be excited at this wavelength; a process called cross-talk. Your last hope is that there is a laser line that hits the first excitation spectrum without touching the other, and reciprocally for the second one.

Dye choice is critical here. Avoid DAPI and GFP, since DAPI emission is very broad, and bleeds through into GFP detection. Better to choose a far red nulclear/DMA stain like Draq-5 for use with GFP. Choose dyes by looking at their excitation and emission spectra, and pick dyes that match your microscope fluorescence filters and laser excitation lines (eg. look at the Thermo Fisher Scientific Fluorescence SpectraViewer for doing that). Choose dydters that are well spectrally separated it at all possible. Different microscopes in the LMF have different choices of excitation filter and laser line wavelengths, and different possibilities for emission filters. Choose your dyes carefully.

Definition: The pixel size does not allow for a highly spatially resolved colocalisation analysis.

Definition 2: Pixels are too big. Close but separate objects which do not colocalise, appear to colocalise.

As a general rule, you should have each object you image sampled over many pixels. When this is not the case, a colocalization statement cannot be reliable made, as the assumptions of the method no longer hold.

Let’s suppose that you have two objects each with different colour, and you would like to assess if they colocalize in space. If we assume that they don’t colcocalise, if the colocalization procedure you are using is working, it should give you a negative result. Consider one molecule of each dye. They are sitting close to each other, but they are not colocalized (in the same place). Now, if the pixel size is so big that these two molecules are imaged on the same pixel, the procedure tells you that they are colocalized. Once again, you are producing false-positive results. 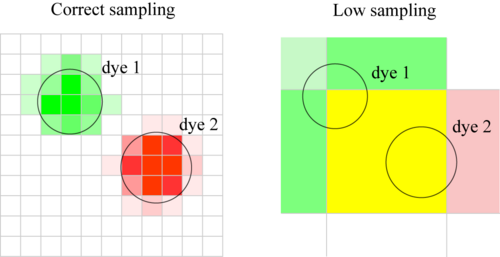 Also remember: since we are doing light microscopy, two objects closer and smaller than the diffraction limit will appear colocalized whatever you do. Particular care must be taken in the case of Z-stack, where the resolution in the Z axis is generally lower than in the XY plane. In order to get around the diffraction limit, and to confirm your colocalisation result, you can do other methods too, such as FRET or FLIM, and immuno precipitation or cellular cofractionation.

The problem with “saturated pixels” occurs mainly when we use pixel-based colocalization (i.e. when we are interested in intensity correlation over space). It is possible to derive the quantitative error made with saturation. See here. If pixels/images are saturated (that is having pixels with an intensity level at the top of the range, ie 255 for 8 bit data) then they are missing information about the real spatial intensity distribution in the sample. This is the most important data in your analysis, as you are usually most interested in the brightest objects - right?! That means its a really bad idea to throw that information away when you collect the images.

If the microscope has poor quality or non chromatically corrected objective lenses and / or has other alignment problems, then images of the same object in different colour channels will appear in different places. Even expensive lenses have a little residual chromatic shift. This is very bad, as it means that, especially for smaller objects, you miss some of the real colocalisation. The microscope should be checked with multi colour 1 or 0.5 micron bead samples before imaging to see if there is a significant problem. Images can be corrected for x y and z chromatic shift if a bead image has been taken under identical conditions.

Think about your biological experiment, dyes and imaging, and be careful throughout. Collect image data that is suitable for quantification. For example, Tetraspeck fluorescent beads with 3-4 colors and different sizes (small enough to check shifts) make great positive controls.

Credits
From Jan Peychl notes.
The two animated gifs are from the Huygens Software wiki page.

The 39 steps: a cautionary tale of quantitative 3-D fluorescence microscopy by J. Pawley 2.