Fiji applied to the Google Summer of Code 2010 program, but was not accepted.

This page contains project ideas culled from the Fiji user and developer community. You can get started by reading some project descriptions, and the mailing list thread(s) that spawned them. Also consider joining the developer mailing list, or finding us on IRC. Details can be found in Help.

If none of the listed projects suit you, but you have your own project idea instead, just throw your ideas at us, on the developer mailing list! (Of course, it should be related to Fiji…)

All projects have the following basic requirements:

Interested students are encouraged to read the Advice for GSoC Students Page, as it has excellent suggestions that might help you to pick a project and shape your proposal.

If your proposal is accepted by the Fiji Development Community you will be expected to work on it full time during the summer. It is cool if you want to take a week off for vacation, but remember that Google is hiring you for the summer to help us improve Fiji. That should be your focus. Don’t expect that you will be able to work on your project for just 10 hours a week and then collect at the end.

If your original proposal doesn’t pan out or becomes too much of a challenge, you should work with your mentor to help redefine it. We really want to see every project succeed this summer, as there is a great deal of interest in these projects from within the user community.

Students can apply for the program at the Google Summer of Code website. Please consider reviewing our SoC 2010 Template and answering its questions as part of your application.

The term image segmentation describes the task where objects in an image are to be outlined, so that every pixel is connected to either a named object, or background.

Segmentation is traditionally a very difficult problem, especially in the presence of variable lighting, noise, or low contrast.

Many segmentation algorithms have been implemented in Fiji to perform image segmentation, such as Auto Threshold and Auto Local Threshold, but in practice, none of them might work, as they were designed with specific images in mind, and these expectations might not be met by your images.

Recently, a new class of segmentation algorithms has been emerging: segmentation by example. These algorithms require a set of examples from which a model is calculated which can be applied to other – similar-looking – images.

We will consider applications for implementations that are either as generic as possible (i.e. they apply to any images), or that try to solve a very specific problem (such as segmenting neurons in serial sections imaged with electron microscopy, or with confocal imaging.)

We have several data sets of images and their corresponding manual segmentations (for training the algorithm). See for example:

You are welcome to use any scientifically-relevant dataset of your choice, but we will give priority to biologically-oriented data sets.

Quite a few algorithms are available as proof-of-concept MATLAB scripts. While it is wrong to think of pixels as little squares, and literally all MATLAB scripts to perform image processing are suffering from that shortcoming, it would be very nice nevertheless to be able to run the scripts without having to buy MATLAB licenses just for that purpose.

Happily, there is a MATLAB clone written in Java: JMathLib. While it is apparently not a speed demon, it should be useful to add JMathLib as a new scripting language to ImageJ, and integrate it into Fiji so that MATLAB scripts can be executed just like all other ImageJ scripts, too.

The project would consist of

The Fiji Updater always looks for a static file containing an XML database of Fiji plugins (both current and past versions) on our website. To put new versions or new plugins there (to upload into the updater), you have to be a Fiji developer with write permission for that particular directory on our server.

In some cases, there are plugins that are either too sensitive, or too specific for a certain application, or not ready for public consumption yet, but still somebody might want to install Fiji in such a way that it automatically updates those plugins, too. Of course, there must be a different location for those plugins than the official Fiji update site, lest the general audience receive those plugins automatically.

The project is not without complications, though:

Also, the Updater cannot upgrade the Java Runtime as of now. There is little reason why it should not offer to download the installer directly from the Sun Developer Network, run the installer, and install Java 3D on top.

For now, Fiji is a portable application, which means you can unpack it anywhere and run it from there.

However, it would be nice to have an installer (similar to IzPack or other Java-based installers), which just copies Fiji from where it happens to be at the moment to a user specified location, and then adds menu entries, file type associations, desktop icons, QuickLaunch shortcuts, maybe adjusts the PATH environment variable.

In short, basically provide all the niceties one expects from an installer.

Composing a feature extraction library for supervised training of segmentations

In order to apply similar approaches to biological images a feature extraction library is necessary to capture the large variability of biological structures. The library should cover a range of features adaptable to different image modalities.

While significant features for a specific classification task can be selected based on manual labels, it would be beneficial for the usability of segmentation plugins to have an intuitive wizard that allows the user to define potential parameters by visual inspection of the data, e.g. providing the corresponding blurred image to select reasonable frequencies.

The new imglib library facilitates the task of translating ITK routines into Fiji. The main idea of this project is to import interesting algorithms from ITK into native imglib code, mainly methods for:

This project requires a bit of knowledge in compiling C++ code on Linux, MacOSX and Windows. The idea is to make a recipe that other people can use to (cross-)compile new releases of µManager, as well as integrate it into the Fiji project for a smooth user experience. To ensure that support for Micro-Manager is not broken inadvertently, you shall add regression tests, too.

The idea behind this project is to implement interactive object classification on an image or stack containing various binary objects, based on morphological data residing on the Results Table. This data will be submitted to one of various hierarchical cluster analysis methods and produce a dendrogram graph. The distance between clusters in the dendrogram is represented by a “distance” axis and the user should be able to select the number of clusters via a slider on the “distance” axis. The objects in the original image are then labelled according to the cluster they belong defined by the distance slider.

This project is motivated by a specific biological questions associated with large-scale image set describing patterns of gene expression in Drosophila embryogenesis. It is inspired by the software developed under the Cell Profiler project.

General formulation of the problem: given a large set of related images, use (and extend) Fiji feature detection capabilities to extract numerical descriptors from the images and use them for iterative generation of a classifier based on user feedback.

Practically, develop an interface where a user (experienced biology expert) can select from a large set of Drosophila embryo images a subset of pictures showing similar anatomical features (highlighted by staining) while interactively assessing the performance of machine learning derived classifier on the whole set of images. The user should be able to influence the machine learning in two ways, by selecting or de-selecting training set images and by influencing the selection of the pre-computed features used in training.

This approach has been successfully used to classify embryo images yet a usable interactive implementation is missing. Interestingly, the images are described by a control vocabulary annotation which presents an unique way to independently validate the results of the machine learning and could also be incorporated in the image selection process (i.e. starting from a more homogenous group).

Fiji runs fine on desktop machines, but for some tasks, it is better to use a cluster.

To that end, Fiji already supports “headless” mode, i.e. operation without the need to have a graphical user interface running. But that is not enough:

Develop storage backend that enables fast random access through limited bandwidth channels to large scale image datasets, e.g. a Java client that can arbitrarily slice into very large volumes hosted by a server without making the server render the slices and without the client loading the full volume.

In 3d, the scale pyramid would be an octree with each box differentially compressed by e.g. DCT or Wavelets. The project would require extending wavelets and DCT to arbitrary dimensions. As there is currently no file format for this kind of data such format has to be defined.

The project should make use of the imglib library

Motion Deblurring from a Single Image

The aim of the project is to implement a state-of-the-art motion deblurring algorithm as described in the paper of Qi Shan et al., “High-quality Motion Deblurring from a Single Image” published at the Siggraph 2008. The algorithm is capable of approximating the undisturbed image without any prior knowledge like the Point Spread Function. Convergence is achieved by using improved noise modeling and actively suppressing ringing artifacts.

(Motion) Deblurring is a major problem in photography, thus interesting to a large audience and can be easily adopted to microscopic images to perform deconvolution.

In life sciences, you often cope with round structures of interest. Such round structures can be cells, vesicles, nuclei or similarly shaped objects. While an ellipse might be a good initial fit, the final outline most certainly is not.

It is important to keep in mind that the objects are clearly convex, as they sometimes overlap, and we still want to find the objects correctly. Example:

The purpose of this project is to segment in a fully automatic way round, convex structures in biological images. This could be done by using a simple template matching approach for the initial stage, or a Gaussian fit, followed by a fit of the whole outline under the desired constraints.

Biological images sometimes contain fiber-like structures, such as cell membranes (in 2D, they are fiber-like), the mitotic spindle, or microtubuli. Example (the green signal): 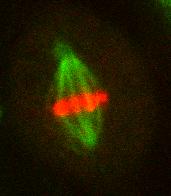 A combination of edge detection, hough transform and fitting should provide a robust segmentation of such structures.

Not all images which Fiji users are interested in contain bright objects on dark background, or vice versa. Sometimes, the structures cannot be discerned using the intensity, but only using statistic measures where the inside pixels have a different geometric distribution than the outside pixels. Example:

There are a number of texture segmentation algorithms that appear to solve the problem to various extents.

This proposal is about adding at least one such segmentation algorithm to Fiji.

Goal: Add a segmentation algorithm to Fiji which uses texture features to discern different objects from background (and from each other).
Language: Java
Mentor: Johannes Schindelin (johannes.schindelin@gmx.de)

We have implemented the Statistical Region Merging algorithm in Fiji. It segments the image into different regions.

This is done by iterating over all pixel neighbor pairs sorted by pixel difference in ascending order, testing by a simple statistical test whether the two regions the two pixels belong to (if they are not already in the same region) are not really different, and therefore can be merged.

The same strategy can be performed using different statistical tests, or parameterized tests.

This project is about implementing a trainer for such tests, whose result is a model that would perform the same segmentation as it was trained with, but can be applied to high-throughput segmentation as well.