Clonogenic assays measure the survival and growth of a single mammalian cell into a colony. These colony or focus formation assays are widely used in radiation biology and cancer biology, where they are employed to study resistance of cancer cells to radiation or the transforming potential of genes, respectively.

We have developed ColonyArea, an ImageJ-plugin that is optimized to perform standard analysis of colony formation assays conducted in 6- to 24-well dishes. The plugin processes each well individually and determines not the colony number, but the area of the well covered with cells, also taking the intensity into account.

ColonyArea can be installed either through Fiji Update Sites or manually.

Download the latest release from the repository. Copy the following files to your Fiji plugins directory:

Restart Fiji. In the Plugins dropdown of the Fiji menu, ColonyArea should now be available.

Sample image files used in the manual can be downloaded here. 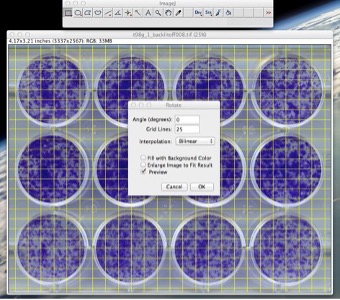 Figure 1: Use the rotate command to straighten the image. 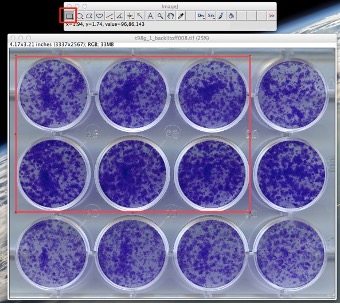 Figure 2: Use the rectangular selection tool to choose the wells to be analyzed. 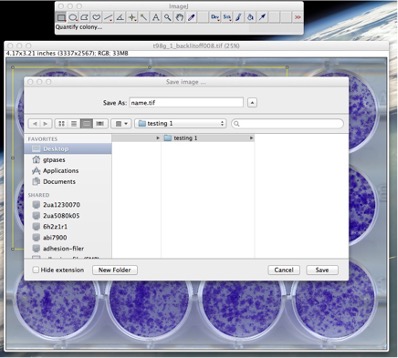 Figure 3: Choosing the location the directory for the result files and the postfix that the files will have. 3. The default for postfix is set as the name of your image file (i.e. a file called “name.tiff” will have “_name” as postfix). 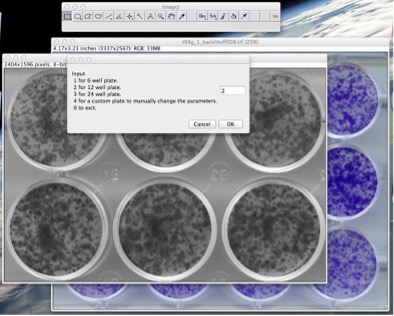 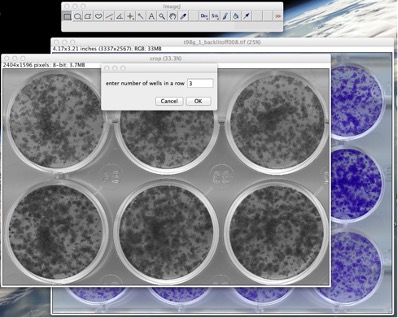 Figure 6: Example from a 12-well plate showing how the wells are ordered in the stack file (“wells_name.tiff”). The numbers in red have been superposed here for explanation purposes but are not present on the execution of the plugin. 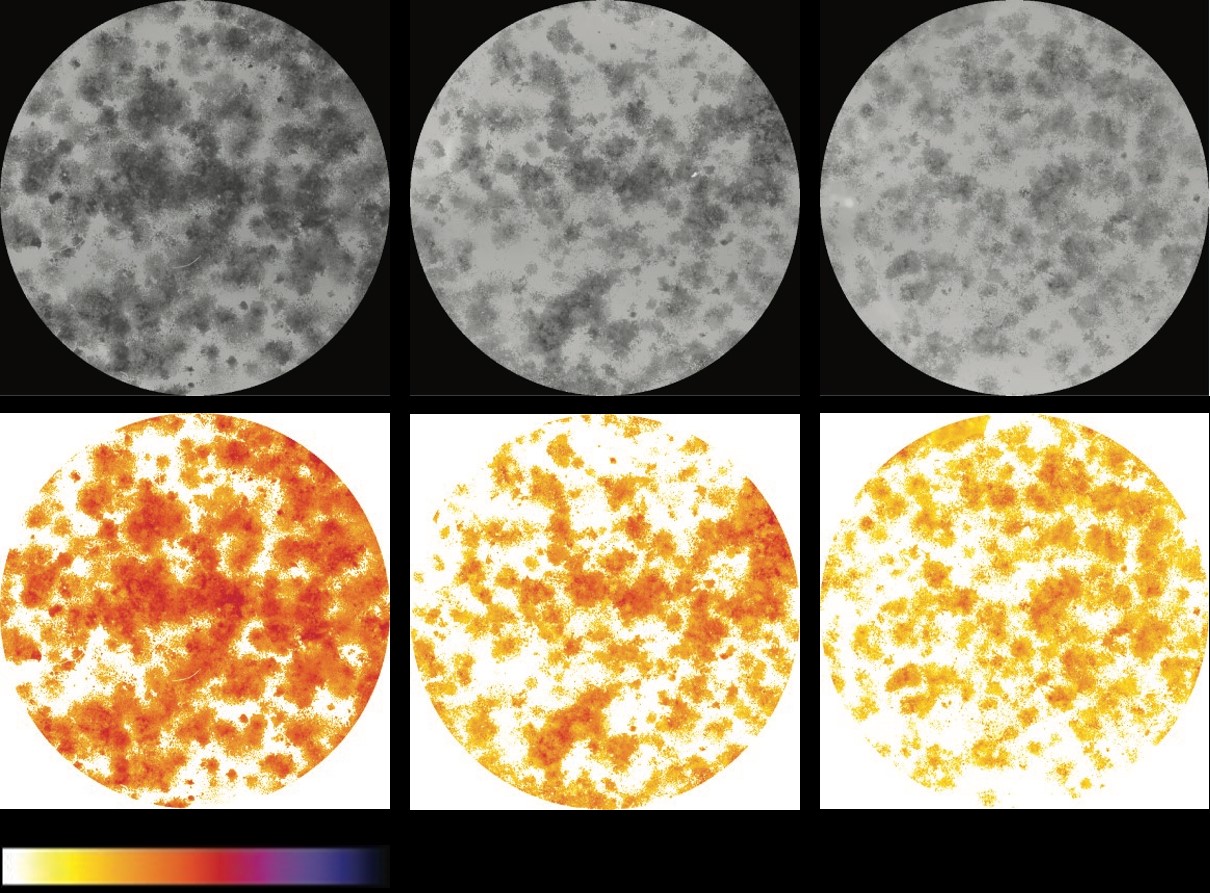 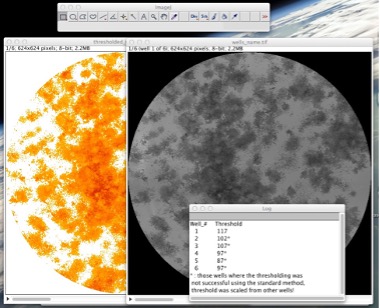 Figure 8: The plugin displays the cropped wells stack and the thresholded stack alongside to allow for visual comparison and identification of cases when parts of the background might have been selected as colonies. It also displays the computed thresholds. 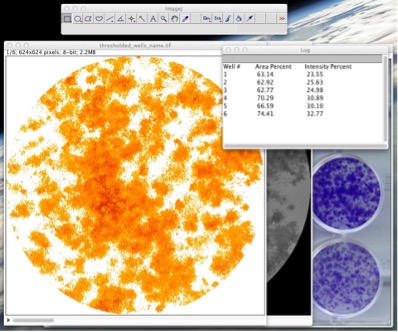 Figure 9: Run the “Colony measurer” tool to measure the area percent and intensity percent. 9. A table of results will appear in a new window and it will be saved with the name “results_thresholded_wells_name.txt”. The columns in the table correspond to the well number, percentage of area in the well covered by the colonies “colony area percentage”, and another parameter called “colony intensity percentage”. Colony intensity percentage is a parameter that takes into account both the area covered by the colonies and the density of the colonies (intensity of staining for each pixel). It can be used as an independent parameter or it can be used to distinguish two or more plates that have the same cell area but have different amount of cells due to a difference in the density of colonies present. On this table each column is separated by a fixed width (number of spaces) allowing for easy transfer into any data manipulation software.

Files saved after running the plugin:

Typically for a file called “name.tiff”, the following files are stored in the directory/folder that the user has chosen: • “wells_name.tiff” – image stack of all the wells to be analyzed.
• “thresholded_wells_name.tiff” – image stack containing all the thresholded
wells.
• “applied_threshold_wells_name.txt” – text file containing the thresholds applied to each well.
• “results_thresholded_wells_name.txt” – text file containing the final results i.e. well number, area percentage, and intensity percentage.
[Note: files in the folder that you have chosen to store your files. These files are only temporarily stored there and are needed for internal work of the plugin. At the end, the plugin will remove them from your folder and permanently delete them.]

In this appendix we present you with extra options that have been included in the plugin and that should help you deal with special cases like custom made well plates or when the thresholding is not entirely satisfactory.

A1. Measuring a sub-region of the well:

If you find that after running the plugin on your colony formation assay images, there are wells that included PARTS of the background as colonies, you can do an analysis of only a sub-region of the well that avoids the wrongly detected background. Typically, when background is included, this is not sporadic, e.g. it may correspond to: the upper half of the well or the left part of the well or may be a band in the center living you with large areas where cells have been detected correctly and can be analyzed. Follow the next steps to measure only those correctly thresholded areas: • Use the rectangular selection tool to select the part of well that has been thresholded properly. Since the quantification is done only for the region inside the well, it is not necessary that the selection will lie inside the well (See Fig. 10). 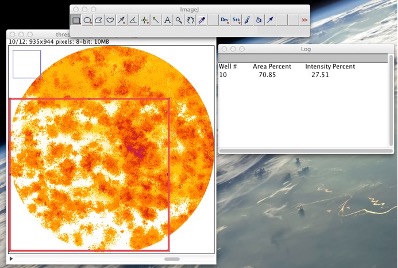 Figure 10: Using a rectangular selection tool to manually choose a sub-region of a well for analysis. • Then you can go to PluginsàColonyAreaàColony measurer. • In the case that you have selected a sub-region of the well, you will be asked to define the range of wells where you want to do this analysis (e.g. all the wells - starting on the first and ending on the last, or only on one or a few of the wells). • Results will be displayed on a table containing only the wells that you have selected. As both the quantification parameters are ratios (percentage)

therefore the area of the well being measured doesn’t have an effect on the results, it only helps to avoid regions where colony detection was not accurate. [Note: If background has been included with the colonies on the whole well or if cells have been excluded in the whole well, you might want to try the steps described in the section “A3. Incorrect threshold detection” of this appendix.]

When calculating the thresholds that should be applied to each well, this plugin uses the changes on the selected area as a function of the intensity threshold (Area vs. Threshold plot). If for a given well, the intensity in pixels covered by cells is sufficiently different from the intensity of those pixels where there is no cells (background), thresholding can be done with our standard method and those two regions can be easily separated. However, if the well has poor illumination (i.e. shading), images have low resolution or the density of cells is too high or too low, they might be problems separating the cells from the background. In such cases, the plugin will try to use the information from all the other wells of the same image to calculate the correct threshold for that particular well. When this happens, the thresholds window will present a warning asterisk (*). In such cases the user should verify if the applied threshold is correct by comparing the two stacks “wells_name.tiff” and “thresholded_wells_name.tiff”. Just make sure that cells have been detected correctly.

If after comparing the two image stacks named, “wells_name.tiff” and “thresholded_wells_name.tiff” you find that some of the wells or even all of them have not been thresholded correctly there are 2 possible solutions to this:

In some rare cases, like the case where the plate only consists of wells with extremely high cell density, or extremely low density (null), or a combination of only these extreme cases, the thresholds detected may be actually very low or very high compared to the correct values. This leads to a gross error in the detection of colonies. In this case, the user should use the option of “Manual colony thresholder” following the next steps: • Open the cropped wells stack saved before while running the “ColonyArea” plugin or just select the stack of cropped wells generated after running “Colony area”. File “wells_name.tiff”. 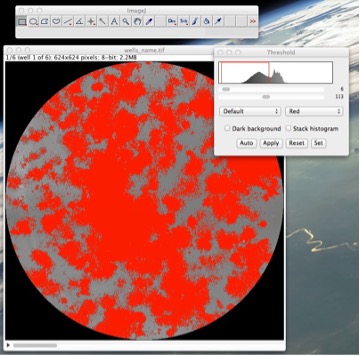 Figure 11: Determining the reference threshold of a reference well in case of failure of automatic thresholding. 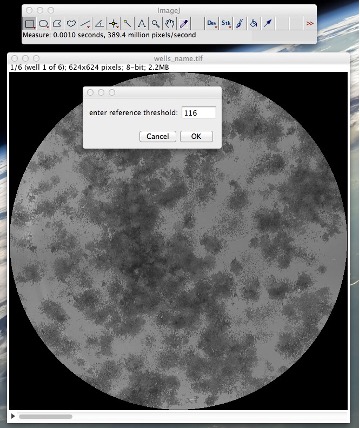 For this plugin to perform correctly, it requires that the selection/cropping of the ROI will be done precisely enough so that the wells can be identified and separated. The position of the wells in the image is determined by the type of plate (6, 12, 24-well or custom well plate); by the number of wells selected (number of wells in a row and in a column); and by the accuracy of the cropping. If the plugin determines that you have not cropped the image to the required degree of accuracy (meaning, the proportions between width and height are not as expected), it will tell you that cropping is incorrect. Based on the expected proportion for your input parameters, the plugin will tell you the maximum error in cropping, and also the direction (horizontal/vertical). This is done to provide a rough estimate of where the user went wrong in cropping. The error displayed is the value in pixels that has been cropped less than required, assuming that the cropping in the other direction was done satisfactorily. (e.g. If the approximate max error in cropping is of the order of 150 pixels horizontally, this will mean that, if the cropping in vertical direction is accurate, then you have to crop 150 pixels more horizontally).

A6. Using a custom plate:

If there is a case when you have performed your experiment not in a standard 6, 12 or 24-well plate but instead on a custom plate, you can still do the analysis by selecting the option 4 “Custom plate” in the step 4 of the section “II: Thresholding and colony quantification using Colony_area”, of this manual. In such case you will be asked to enter 3 parameters about your custom plate (See Fig. 13 for details): • 𝐾2 = 𝐷2 𝐷1, the ratio between the thickness of the well’s wall and the internal diameter of the well. • 𝐾3 = 𝐷3 𝐷1, the ratio of the well spacing (shortest distance between the outer walls of two adjacent wells) to that of internal diameter of the well.

• 𝑁, percentage of diameter reduction (set as 5% by default). The actual area of the well that is processed consists of an area smaller than that of the actual well. This is primarily due to two reasons: a) To prevent that the wall of the well is included in the area to be processed. This could happen if the image is not straightened or the selection of region of interest is not done to a required degree of accuracy. b) The region near the wall shows unpredictable behavior in colony formation and that is why this area is neglected from the analysis. Reduction of the default 5% corresponds to about 2 mm in the case of a 12 well plate. 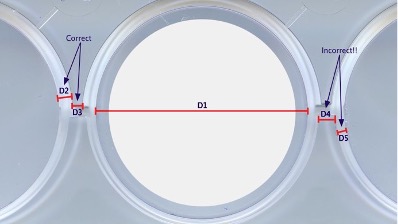 Figure 13: Parameters calculation for a customized plate. 𝐷2and 𝐷3 are the correct way of measuring the well’s wall thickness (maximum thickness) and the inter-well distance (minimum distance) while𝐷4 and 𝐷5 are the incorrect way of measuring them. The final area to be analyzed for colonies (white area) corresponds to the area of the well reducing its diameter 𝐷1 by 𝑁%.

Steps involved in the processing

[Note: sum of maximum intensities can be rewritten as 255*area of well or region.]

If you use this tool, please cite this paper:

Beginning in October 2022, maintenance of this plugin is handled by Turku BioImaging, a broad-based, interdisciplinary science and infrastructure umbrella that aims to unite bioimaging expertise in Turku and elsewhere in Finland. Turku BioImaging is jointly operated by the University of Turku and Åbo Akademi University.

For support, open an issue in the GitHub repository.